About the Papakilo Database

The Office of Hawaiian Affairs’ (OHA’s) Papakilo Database, is the ongoing development of a cutting edge and comprehensive “Database of Databases” consisting of varied collections of data pertaining to historically and culturally significant places, events, and documents in Hawai'i’s history. This online repository of data will greatly increase OHA’s ability to preserve and perpetuate cultural and historical information and practices, thus providing an invaluable resource to educate other regulatory agencies, OHA’s Native Hawaiian beneficiaries, and the general public.


The name, Papakilo, was provided by Puakea Nogelmeier and Kau'i Sai-Dudoit and selected by OHA's CEO, Ka Pouhana Dr. Kamana'opono Crabbe. The definition of Papakilo is “a foundation for seeking, searching, observing.” Dr. Crabbe expands on this definition by saying that the name, Papakilo, "embraces the function of the database which not only implies seeking or to search, but the continual exploration of infinite spaces, levels of knowledge as a perpetual cycle for the next generations to come."

The primary need for this project was identified by the Native Rights, Land and Culture Hale (NRLC). Having a database of various collections of data would allow NRLC to assess and provide comprehensive feedback in compliance work as identified by OHA’s Strategic Goal #1; “All goals of the OHA strategic plan will list at least one strategy that will promote, protect, and or advocate for native Hawaiian rights, entitlements and or issues,” in addition to satisfying other Hale goals such as Goal #2: “OHA shall have drafted and implemented a plan that identifies and provides solutions to safeguard endangered traditions, practices and rights, and subsequently put into practice steps that will protect, re-establish and enhance Hawaiian cultural assets by the year 2007,” and Goal #5: ”By 2007 OHA shall have protected natural and cultural resources through the adoption of administrative, legislative and legal actions.”


This collective and one of a kind project addresses the following Goals:


'Aina – To maintain the connection to the past and a viable land base, Native Hawaiians will participate in and benefit from responsible stewardship o Ka Pae 'Aina O Hawai'i.


Mo’omeheu – To strengthen identity, Native Hawaiians will preserve, practice and perpetuate their culture.


Ho’ona’auao – To maximize choices of life and work, Native Hawaiians will gain knowledge and excel in educational opportunities at all levels. 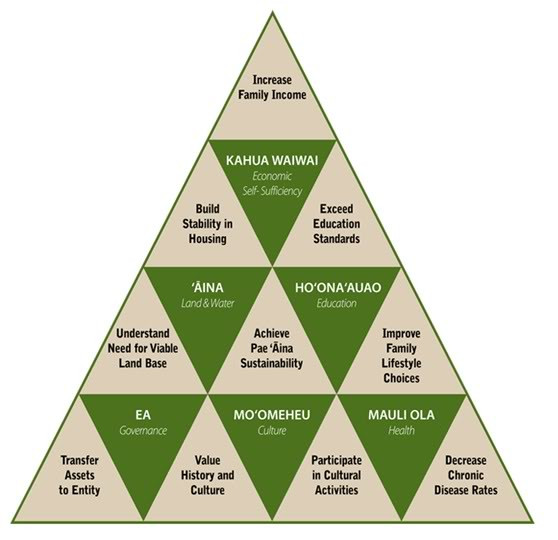 Reinforced on a deeper level, the Papakilo Database also connects with a number of strategic results which include the following:


Understand Need for Viable Land Base – Percent of all Hawaii residents understand and agree that a viable land base is necessary for the new Native Hawaiian governing entity.


Value History and Culture – Percent of all Hawai’i residents appreciate and value Native Hawaiian history and culture as a basis for residing in Hawai’i.

Participate in Cultural Activities – Percent of Native Hawaiians participating in cultural activities, including language, who interact with the ‘aina for cultural spiritual, religious , and subsistence purposes.


OHA's mission is "To malama Hawai'i's people and evironmental resources, and OHA's assets, toward ensuring the perpetuation of the culture, the enhancement of lifestyle and the protection of entitlements of Native Hawaiians, while enabling the building of a strong and healthy Hawaiian people and nation, recognized nationally and internationally. The Papakilo Database aligns with this mission on many different levels and empowers OHA to take on the responsibility of safeguarding valuable historical and cultural knowledge.


The 'Olelo No'eau "O Ulumaheihei wale no, iaia o loko, iaia o waho" speaks of Ulumaheihei, the most trusted friend of Kamehameha, and his extensive knowledge of kingdom affairs. Because of his history of stewardship, he was also the individual entrusted with Kamehameha's 'iwi (bones) after the King's death. This project seeks to follow in the footsteps of Ulumaheihei and become the trusted steward that preserves the history and culture of our people, before they are lost to us forever.

Creating an account provides the ability to save your favorite search results and make public and private notes or comments on specific records.

OHA’s mission is to better the conditions of all Hawaiians.

Please help us assess the extent to which our beneficiaries are utilizing this website by choosing one of the following:

I am Native Hawaiian

I am not Native Hawaiian

I choose not to answer